In this quick demonstration we're going to discuss how you can use the Sonitus Phase plug-in to widen the stereo image of your mixes.  fx:phase is a phase shifter or phase delay - it is not a phaser, which is an entirely different type of effect. fx:phase is used for applying a constant phase shift at all frequencies.

Before going any further you will want to ensure that your playback system is in stereo so that you can hear the effect of the plug-in.  If you have trouble hearing it double-check to make sure everything in your signal chain is stereo; if you are in a noisy environment or have less than ideal speakers try using headphones instead.

The controls of the Phase plug-in are very straightforward and simple.  For a full overview click the ? button in the upper right corner of the interface.  For this tutorial we are going to work with a simple project that only has the 6 audio tracks of a drum set bounced from one of the "Marley Reggae" kits included with Session Drummer 2.

To get started you'll need to download the bundle (.cwb) file  (approx 26 mb)

Let's take a quick second to review how the tracks in this project are routed.  In this example we have six mono audio tracks that each have their output set to a bus that was created named Master.  The output of this bus is then outputting directly to your audio device.

In our Master bus you will notice that one instance of the Sonitus Phase effect is inserted.  If the plug-in's interface is not displaying automatically upon opening the project, you can bring it up by double-clicking on the plug-in name in the Master bus' fx bin, outlined in the image below: 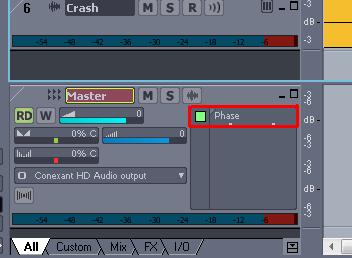 Now with the Phase interface open, let's first click the Reset button on the plug-in to restore it to the default settings and then click Play or hit the SPACEBAR to listen to the project.  You should hear a pretty laid back reggae beat.  When mixing drums it is common to place the different pieces of the drum kit in the stereo field to make the listener feel like you are in the same room as the drum kit. You'll notice that some of the tracks are panned more left or right.

Now lets put the Phase plug-in to work to make it feel more like we are surrounded by the kit.  Locate the 'Width' slider and move it all the way to the right until it reads "200%".  Listen to the kit closely now the effect should be a wider stereo image.  Moving the slider all the way to left until it reads "0%" will decrease the width so that you end up with a mono signal.

Aside from widening a drum set mix - the width control can be used to widen the stereo field of any stereo audio source.  It can be very effective on keyboard tracks and for orchestral sections.  For example when mixing an orchestral recording the engineer may want the wind instruments (those sitting in the front section) to sound like they are 'inside' the rest of the orchestra.  With the use of clever panning and stereo width this can be accomplished fairly easily.