The Sonitus Modulator combines six time-varying effects into one handy effect that can be used for a variety of different tasks.  In this tip we are going to explore the use of this effect to process guitar sounds but its creative uses go way beyond that.  First let's take a look at the interface and the six modes of the Sonitus Modulator.

The effect can be changed by using the 'Mode' drop down in the upper left corner.  If you are unfamiliar - a brief description of each mode is below from the plug-in's help contents.  For more in-depth info on every parameter on the modulator's interface simply click the Help button in the upper right corner of the plug-in's interface.

Now that you have a general idea of what each mode does - let's give some of them a listen.  In this demo we are using a clip of the guitar track "Magic's Strat" from the SONAR 8 demo song Guilty by Unified Tribe but you can use any audio file.  First listen to the dry original recorded version.

To get started, let's check out the Flanger mode by doing the following:

So we applied this flanger effect but what is really happening to the audio signal?  Well let's take a look at the following image: 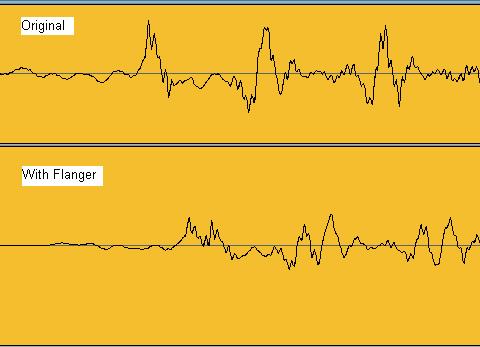 The top waveform is the original track, the bottom is the track with the flanger effect applied.  The first thing that stands out is that the first peak is slightly behind the original - this is a result of the 'Delay' setting which will represent the minimum delay time to be used (in milliseconds).  The delay time is influenced by the Depth setting, meaning the delay time varies from Delay to Delay+Depth milliseconds.

When working with guitar tracks one of my favorite effects is the String Phaser mode.  The Modulator comes with a lot of great presets - but I like mine with a lot of feedback.  To follow along load up the modulator in your track's fx bin and use the following settings:

Your modulator should now resemble the following image: 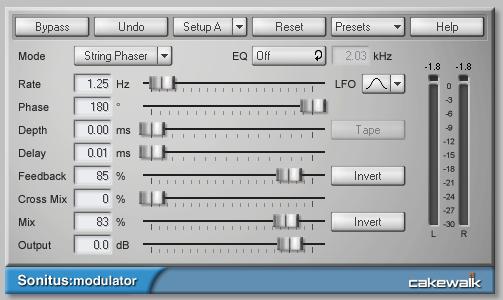 Give your track a listen - this is a bit of an extreme use of a phaser but you should get the general idea when used lightly this can add a unique timbre to your tracks.  Listen to our track with the String Phaser.

There are still four more modes that you can experiment with - I'll leave you with two final tips: