The Cakewalk 2016.10 update includes the following: 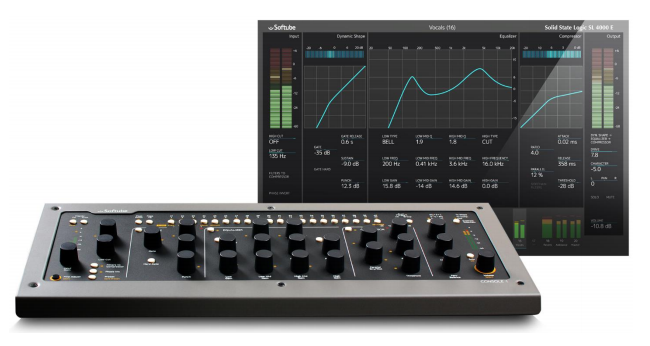 Softube’s Console 1 takes a different approach from conventional control surfaces, which typically emphasize multi-track control with traditional faders, or moving faders on more expensive models. Instead, Softube has modelled an SSL 4000 E console in software (endorsed by SSL for its accuracy), with the Console 1 providing hands-on control over a sophisticated channel strip that incorporates gate, EQ, compressor, high and low cut filters, and emulated analog console non-linearities. And just for kicks, there’s Softube’s Transient Shaper that was not part of the SSL 4000 E. Furthermore, Softube offers optional-at-extra-cost software packs for other consoles, like the SSL XL 9000 K-Series and the British Class A console.

The basic workflow is you select a track and then tweak the channel strip’s controls, while your monitor displays a graphic representation of those tweaks. It’s all pretty fluid, and the controls are laid out in a way that’s both ergonomic and logical.

Although Console 1 has been compatible with all major DAWs since its introduction, now Softube and Cakewalk have collaborated to bring an additional level of control where Console 1 hardware can control vital SONAR functions. These include:

In addition to the Console 1 Output Volume and Pan knobs controlling the corresponding settings in the Console 1 software, they can now be switched over to control the pan knob and volume fader on the selected track.

You can switch the Solo and Mute buttons to control the selected track, as well as control these settings in the Console 1 software.

When you edit Vol, Pan, Mute, Solo, or Send gain via the Console 1 hardware, SONAR will update in the values in real time.

(Please note that as of this writing Softube is still making some tweaks at their end, so the new Console 1 software might not be available when this eZine hits the world; the anticipated release date is early November. However in any event, SONAR is ready for it.) 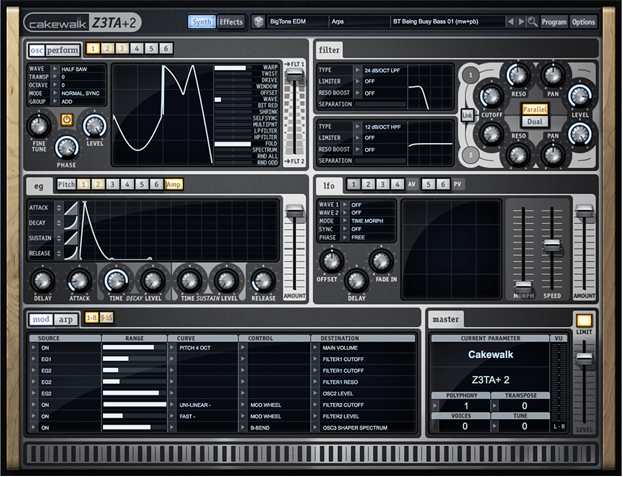 What’s more, you’ll find bug fixes for MIDI files with long arpeggios, and now when you pick a controller in the modulation matrix, you can rest assured you’ll get the one you expected.

(Get it Before We Change Our Minds)

The audio cognoscenti know that Cakewalk’s cross-platform CA-2A is one of the finest emulations available for the classic compressor/limiter that has been a mainstay of hit recordings for over half a century. Even SONAR users who have lots of other compressor plug-ins, including other emulations of the same compressor/limiter, choose the CA-2A over anything else.

Why? Because the CA-2A is one of those plug-ins that seems to have a special mojo all its own. It does something downright magical with vocals, not to mention bass and other instruments. Part of this is, of course, due to the original circuit’s use of opto-isolators instead of VCAs or other active electronics to provide the needed dynamics control. But the other element is Cakewalk’s DSP expertise (as evidenced in the QuadCurve, Concrete Limiter, and many other plug-ins), which has modeled this audio classic in all its detail and definition. What’s more, there’s sidechain capability, and the controls are blissfully simple to use—important when you want to dial in a superb sound fast while in the heat of creativity.

Here are a few of the highlights:

For more information on the details behind the CA-2A, click here—and when you’re ready to get your free plug-in, click here. And there’s even a cool video on CakeTV.

You know you want it…but you better hurry, because we might change our minds any day now. You’ve been warned.